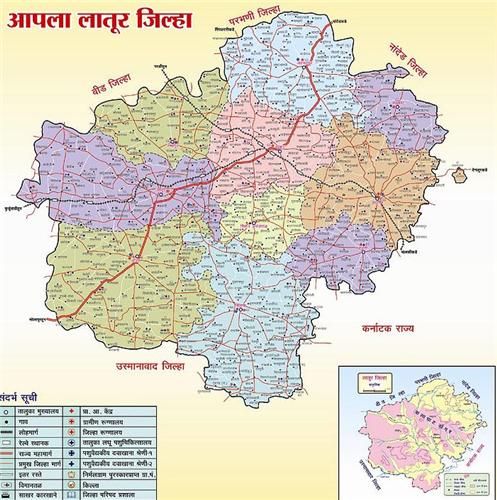 Latur is located at 636 meters above the sea level in the Baaghat plateau. The shaky surface and geographical existence of Latur on the Maharashtra- Karnataka boundary with Bidar, Nanded on Northeast, Parbhani on north, Beed on Northwest and Osmanabad on the west and south side states reasons for its unique climate and environment. The city is known as the Oxford city of Maratha region due its numerous educational institutions and its outstanding performance in SSC exams.

The climate of Latur is hot to pleasant with 13° to 41° degrees with minimum humidity. The highest recorded temperature was 45° and the lowest temperature was 6.9°. The winter season has the most welcoming climate with low temperatures and pleasant environment. Apart from the severe cold waves which hit the city during the months of December and January, the climate is quite enjoyable in the winters.

Latur is an Earth quake prone area. Latur witnessed a writhing intra-plate earthquake on September 1993. Though the quake measured 6.3 only on Richter scale it was responsible for the deaths of more than 30,000 people. However, the loss of lives was mainly because of the poor construction of the houses and bad town planning. The city had major breakdown during the time of the quake but made a remarkable comeback afterwards.

Latur is rapidly becoming economically independent due to presence of numerous agricultural industries. It has been playing the part of a major trade link to the northwest states. MIDC has developed Latur into a flourishing industrial hub. The major produces are sugar and edible oils. Along with it grapes, turmeric, mangoes, pomegranates, citrus fruits and custard apples are also produced in abundance.

Government has planned special SEZ in the Latur region as a step to further develop the city. The industry and trade has taken an upward rise in the past decades due to many factors. One reality no one can ignore is that even though affected by natural calamities so fatally, Latur has come along a long from its sad past and has now revived with full vigor.

Population of Latur according to the 2011 census is 3, 82,754. There are many places of historical importance in Latur.